31Aug03 Results from the World Senior Trophy are now available

25Aug03 Jimmy Siemers USA jump record of 71.9m from the US Open is approved by IWSF TC

It was initially reported at 71.8m, but applied for and verified at 71.9m

Results are being updated dynamically here 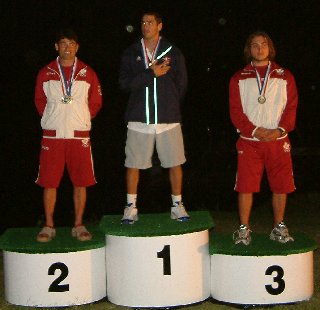 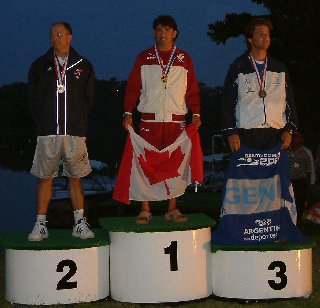 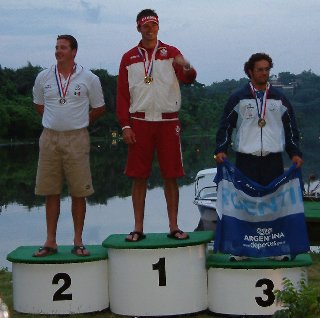 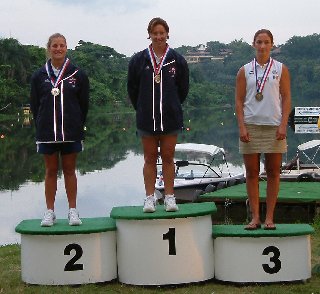 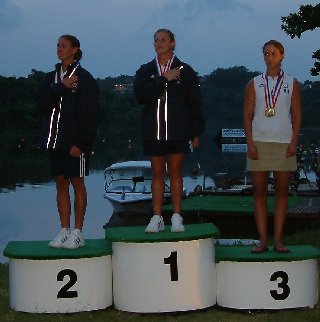 The Cableski Council is pleased to announce the confirmation of the following jump world records:
Julia Meier-Gromyko (BLR) and Claudia Geiger (GER) both holder of the new record in the ladies division with 44.7m, jumped in Kiefersfelden, Germany.

Jochen Luers (GER) jumped a new world record in the mens division of 59.0 m, at the same competition

The IWSF Executive Board has conferred the newly created

to Ralph Meloon and George Blair.

The presentation will be made at the beginning of the IWSF Hall of Fame induction in the evening of September 18 at Polk City, FL.

All forms can be downloaded from www.worldwakeboardcouncil.com

Australian Visa details go to Department of Immigration and Multicultural Affairs or their main website at http://www.immi.gov.au/
Event Schedule is not finalised at this time.
Logan Cable Park construction is on schedule.

Note: You can cancel the font download if you want

13 Countries Entered The Competition and it was a very successful event. The site was the Olympic rowing channel. The Organisers are already planning for next year...
Notable winners were:
Will ASHER GBR 4.50/10.75
Natalie HAMRICK USA 5.00/11.25
Aliaksei ZHARNASEK BLR 11460
Clementine LUCINE FRA 7120
Jaret LLEWELLYN CAN 67.60
Jacky JUNTER GBR 48.00

25Jun03 The Organizers of the 21&Under World Championships have posted the deadline for signing up for training on the official lake is September 30th, 2003

The IWSF TC has notified elite skiers that since there is no World Cup list for 2003, (per Rule 4.01 - 3), the top 6 skiers on the Elite Ranking List will qualify for the World Championships. The List Qualifications will be as of August 24 after the Danish Open and Princes Tournaments.

The top 8 qualify as Individuals for the 2003 World Championships

Hint! - If you are searching for your name, it is best done by saying:
john AND smith
if your name is John Smith.

The first rings shown here are awarded to Jaret Llewellyn CAN and Elena Milakova RUS who were previously named the IWSF 2002 Athletes of the Year. Click on the picture to see the detail.

This program creates the IWSF Homologation Dossier and is an important tool for use at record capability tournaments. Thanks to Emmanuel for his efforts and important contribution to water skiing.

08May03 World 21 and Under Championships Bulletin #1 is now available

The Tournament council has received modifications to the new trick point proposal it recently received. It is presented here for reference.

The Tournament council is currently studying a new trick point proposal it recently received. It is presented here for reference.

The tournament council had previously made available another proposal that is also under study and shown on this link.

The EAME Region Tournament Council hosted an Officials seminar attended by over 80 officials in Castelldefels, a suburb of Barcelona where the Olympic rowing channel is located. The channel is also used as a tournament water ski site. The seminar covered many technical aspects of water ski officiating includeing a demonstration of the new boat path monitoring video sofware and a video presentation highlighting new tricks proposed. The seminar was hosted by EAME TC Chair Stefan Rauchenwald and Thomas Ludwig

In Portugal thr EAME's Coaching Commission completed its 2nd Coaching Seminar Hosted by the Portuguese Federation the seminar covered both the technical aspects of the sport as well as holistic approach to coaching which is relied on so much by today's successful coaches. The seminar was conducted by Commission members John Wood and Jean Michel Cau who delivered the programme over 3 days.

The tournament is slalom, tricks and jumping and will be held in the Olympic rowing channel near Barcelona. The total cash prize for all six events is 18,000 euros
Additional Information

The site is taking shape and preparations are underway for the water ski event in the 03 Pan Am Games, the once every four year multi-sport festival that is second in size only to the Olympics.

The ranking list for the year ending October 31, 2002 has been finalized and is now available here.

10Mar03 Elite Rankings Season starts with the completion of Moomba

Follow the athletes in their race for the Elite Rating crown at www.iwsfranking.com

09Mar03 Moomba early results from the in progress tournament

09Mar03 Moomba ready for the finals

The internationl scope of the Junior Moomba is shown as the six event leaders after the preliminary round are from five different countries repersenting all three IWSF Regions.
Follow the results on the official Moomba web site. Video Press Release Elite Rankings(high Speed Link- 2MB)

Hint! - If you are searching for your name, it is best done by saying:
john AND smith
if your name is John Smith.