Winners are:
Final results have been added to preliminary results on the results links shown from yesterday.

Before the Typhoon in Akita
World Games Photo Gallery

IWSF President Andres Botero and Pan Am Region President Vern Oberg are attending the Pan American Sports Organization meeting in Santo Domingo, Dominican Republic, the site of the 2003 Pan Am Games to be sure water skiing continues to be in the Pan Am Games as it has in 95 and 99.

Andres Botero, IWSF and Wilton Martinez from the Dominican Republic stand in front of the proposed slalom lagoon

A pioneering water skier in New Zealand. Appointed Judge at all World Championships from 1989 to 1999. Member of the Tournament Council. President of the New Zealand federation until his death in November 2000. Men's World Overall Champion 1981, 1983, 1985, and 1987. Winner of seven medals inthe World Championships. Set the World Record in jumping six times, and held it, except for two months in 1992, from 1988 to 1995. Chairman of the IWSF Barefoot Council for ten years. Member of the German National Tournament Team for seven years and the Barefoot Team for five years. Twice Chief Judge of the World Barefoot Championships. Women's World Overall Champion in 1987 and 1989. Winner of fifteen medals in the World Championships while a member of the U.S. Team from 1979 to 1989. Set five World Records each in jumping and slalom, with her last jumping record standing for eight years. World Champion in tricks in 1961. Many times European Champion from 1956 to 1961 in all events. Organized the first World Cup in Tahiti in 1971 and again in Bordeaux in 1980. Founder of the IWSF Barefoot and Racing Commissions.

The announcement was made by Bill Barlow, Chairman of the IWSF Hall of Fame Committee

06Aug01 The City Of Tianjin, China To Bid On 2002 IWSF World University Championships

The runs were judged from the shore but Nicolas supplied an in boat video for viewing.(uses real player)

Read the final results with podium pictures from the EAME Championships courtesy of planetwaterski.com

28Jul01 Elena Milakova RUS ties her own World Jump Record of 53.3m at the European Championships

The IWSF tournament council voted to substitute a new entry mechanism to replace the World Cup Ranking mechanism since the World Cup was not held this year.
In addition to the top eight in each event, the Tournament Council will accept entry of up to 4 skiers in each event (2 in overall) under the following conditions:
The skiers must have a two performance average (or single overall performance) equal to or * higher than the qualification level of the ranking list entrants (8th place or 5th overall). Of those skiers who submit their scores performed between Aug 27, 2000 and Aug 27, 2001, the four highest (2 overall) will be taken.
Skiers who feel that they qualify should submit their scores to the Ranking List Chairman, Bob Corson. All scores performed before May 1st of 2001 have already been received.
The deadline for score submission will be September 3, 2001.
* error corrected 7/30/01 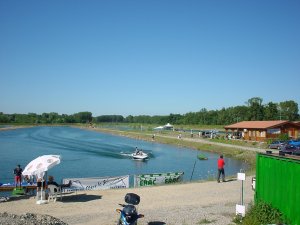 Recetto - Site of the 2001 World Championships

The rescheduled event will be held in Recetto, the site of a World Cup stop last year. The dates will be one week later Sept. 24-30.
(Note-Correction)

Overall
This includes all corrections listed so far.

Note: This news would have been sent directly to you if you had signed up for the IWSF Newsletter


Overall and all data will be available shortly
This starts the 30 day correction period.
eMail corrections to IWSF Ranking List Chairman, Bob Corson