Emma Sheers (AUS), World Slalom and Jump Champion, returned to Golden Falls Waterski Club in Ireland nine years after her World Jump Record performance of 48.6m at the PADDY CLASSIC in 1996. To commemorate her achievement, the Club unveiled today a specially commissioned granite memorial to mark the occasion and the details of her record. Emma was on site for the ceremony and also to receive a special certificate from the Irish Waterski Federation. Is this the first time that a Waterski performance was recorded in granite? Emma's Rock may inspire a new trend of great Waterski occasions.

National Overall Waterski Champions, Ryan Green (AUS) and Sarah Gatty Saunt (GBR) married last Sunday in the picturesque village of Burghfield - just a short distance from Kirton's Farm where so many great Waterski memories were made. Almost 40 Waterski athletes and friends flew all the way from New Zealand and Australia to join over 150 others from the USA, Canada, Ireland and all over Great Britain. These included Rhoni Barton and Michele Simpson from the USA, Emma and Curtis Sheers from Australia, Kyle Eade from New Zealand and Jason Seels, Glen Campbell, Philippa Roberts Shedd, John Battleday and Jeremy Newby-Ricci from the UK. The happy bride and groom are now honeymooning in the Bahamas before the start of a hectic 2005 Waterski competition season. We wish them every happiness together.

(October 2004 list)
If there are any questions please email to Bob Corson, World Ranking List Chairman
All known corrections and ommissions have been included. This is the final copy

Tournaments held on the weekend of April 30-May 1, 2005 will be included in the Ranking List that covers the period from May 1, 2004 to April 30, 2005. This list will be used for Individual Qualification for the U21 World Championships and the World Championships, both being held this season.

28Mar05 Latin American Championships is biggest ever in Lima, Peru

Events are still being added, but this is a good look at what is planned so far

Jaret Llewellyn CAN and Angeliki Andriopoulou GRE are the overall winners

Check out the final results on the Moomba web site

11Mar05 Moomba is under way with excellent competition

The Junior Competition is complete and the Open is heading toward the finals on Monday.

Check out the results on the Moomba web site

Australia's finest athletes, officials and 'A List' celebrities crowded into the Convention Centre in Sydney last night to see the 2 leading ladies of Australian Water Skiing win in their respective categories.

Gizella Halasz (Barefoot) and Emma Sheers (Tournament), both of Queensland, took the image of water skiing in Australia to unprecedented height by winning their awards. Competing against an array of World Champions and Olympians from Australia, they both accepted their awards making it one of the most successful nights Water Skiing Australia has seen. After last years win in the junior category by Victorian Nerissa Wright, it was always going to be tough night competing against the Olympic team from Athens with their record breaking results; But Water ski showed just how well we are respected with both Gizella and Emma winning. With representatives from both the Barefoot and Tournament divisions, AWSF President Gavin Brain, AWSF Directors Geoff Davis and Noel Dix, Region AA Barefoot Chairman Brian Price plus a host of supporters and sponsors the night was a big success not only for Gizella and Emma but for the whole of the sport.

06Mar05 45th Anniversary Moomba Masters is about to start

It all takes place from March 9th to Monday 14th on Melbourne's Yarra River. Both the Victorian Government and the City of Melbourne have stepped forward with cash sponsorship this year. For the first time, a giant out-door screen will help the enormous crowds to enjoy the spectacle. With athletes from 13 countries, the 45th Moomba Masters will set the standard for the 2005 Waterski season. 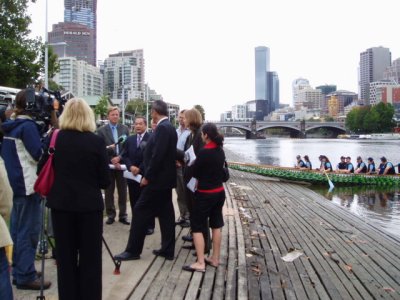 Melbourne Lord Mayor, Councillor John So and IWSF Vice President Max Kirwan face the Press on the banks of the Yarra River 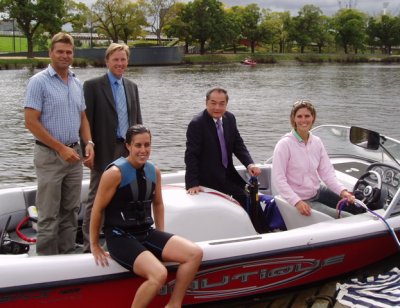 10Feb05 World Tournament Council issues its list of skiers invited to take part in the 2005 World Games in Duisburg, Germany.

03Feb05 World Barefoot Council issues its list of skiers invited to take part in the 2005 World Games in Duisburg, Germany.

If there are any problems or issues please email to Bob Corson, World Ranking List Chairman
All known corrections and ommissions have been included. This should be the final check copy

A total of 30 Federations attended the annual EAME Congress last weekend in Monte Carlo and two new Federations were also announced. The Federations of Qatar and the Serbia Montenegro were warmly welcomed by EAME President Franz Kuhn (AUT). IWSF World President Kuno Ritschard also attended. A full presentation was made to the 30 Federations on World Cup 2004 progress and plans for 2005. The 2006 EAME Congress will be held in Doha, Qatar.

If there are any problems or issues please email to Bob Corson, World Ranking List Chairman
This is especially true of the U21 list as some skiers may not have had their year of birth correctly regestered.

President Kuno Ritschard congratulates George Blair together with his wife Jo-Anne for his 90th Birthday at Cypress Gardens where he was applauded by the spectators with a standing ovation after his succesful show.
Photo: Lynn Novakofski

Overall will shortly be available. If there are any problems or issues please email to Bob Corson, World Ranking List Chairman
This is the start of the 30 day review period.